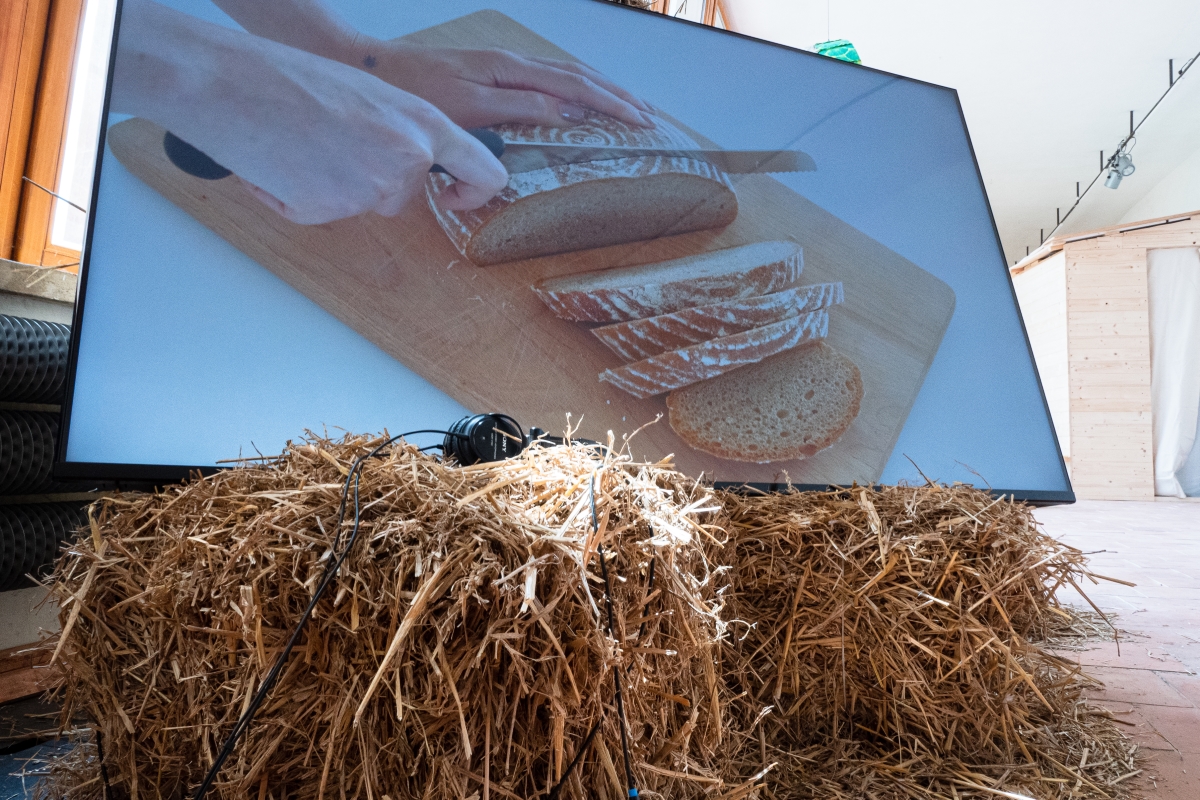 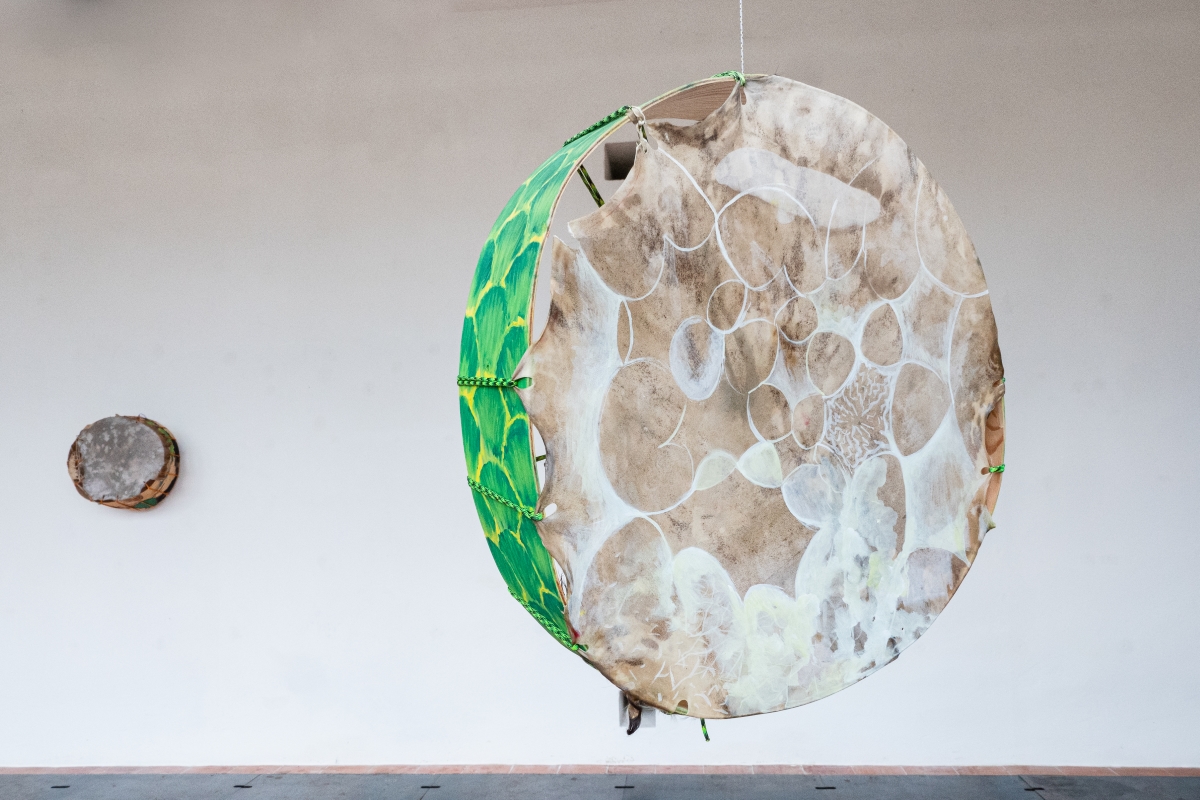 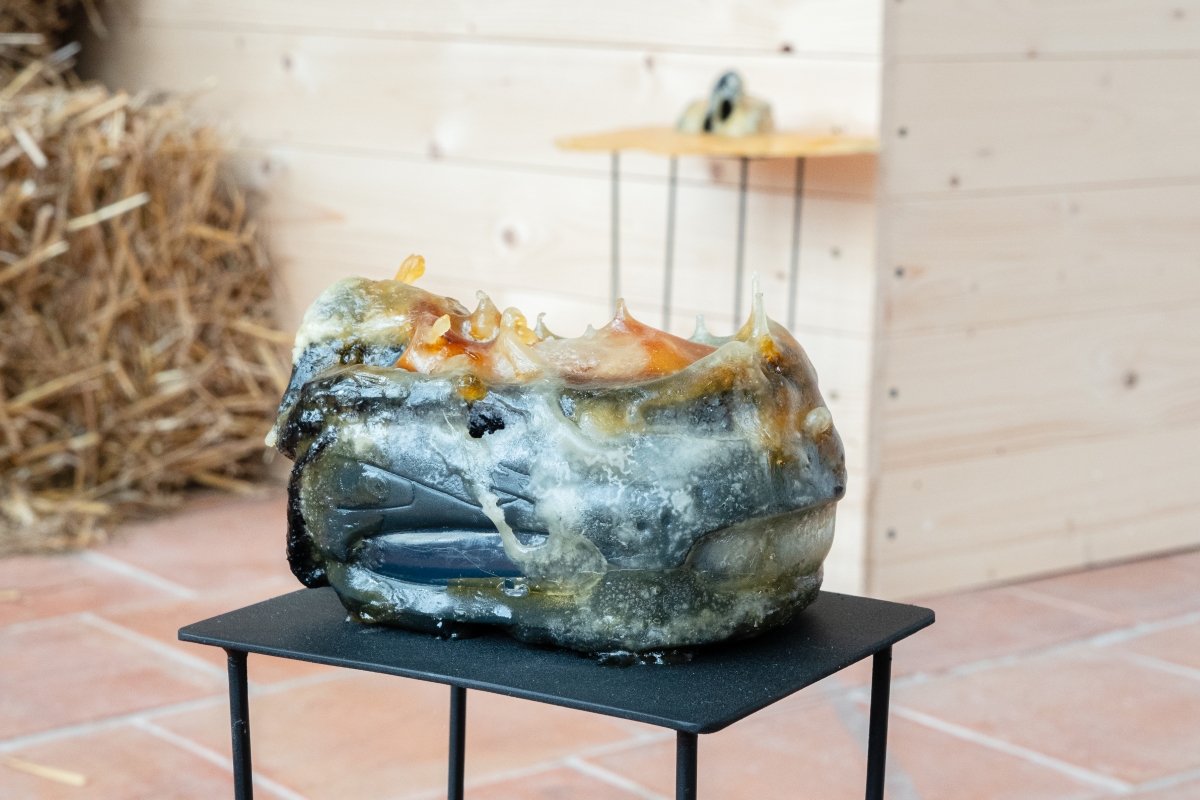 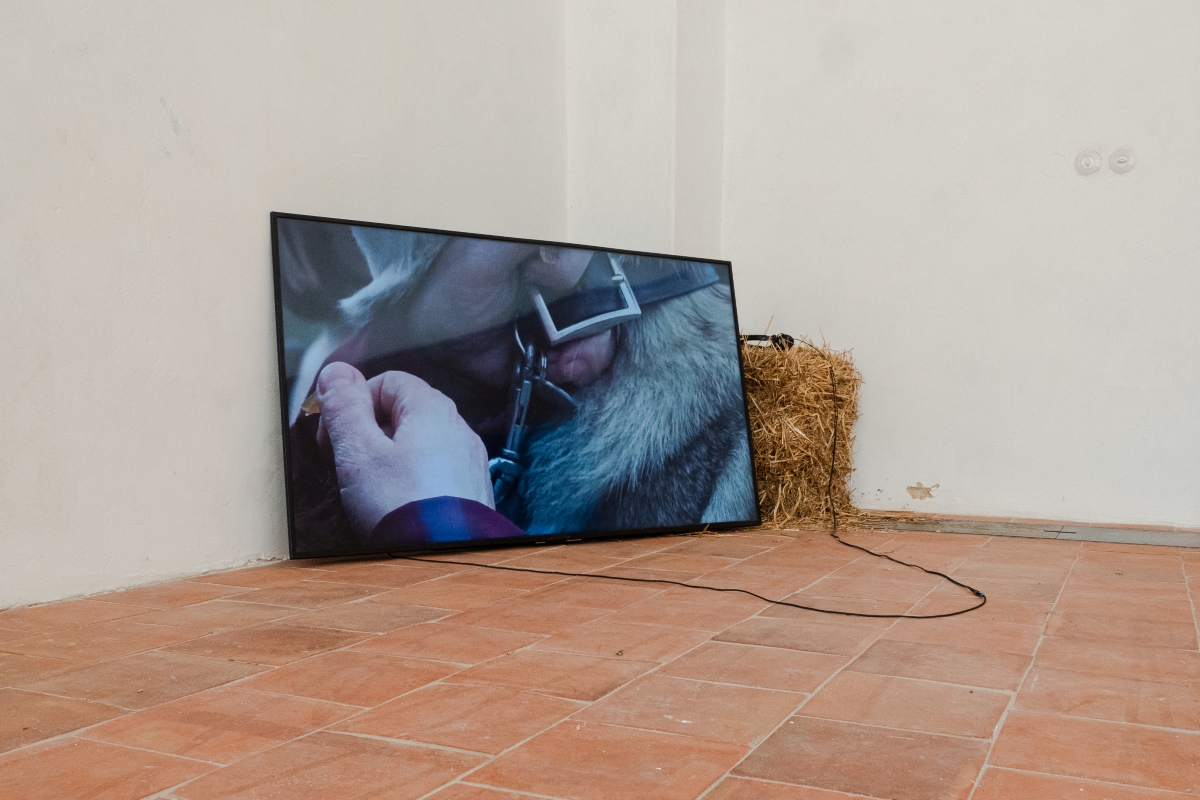 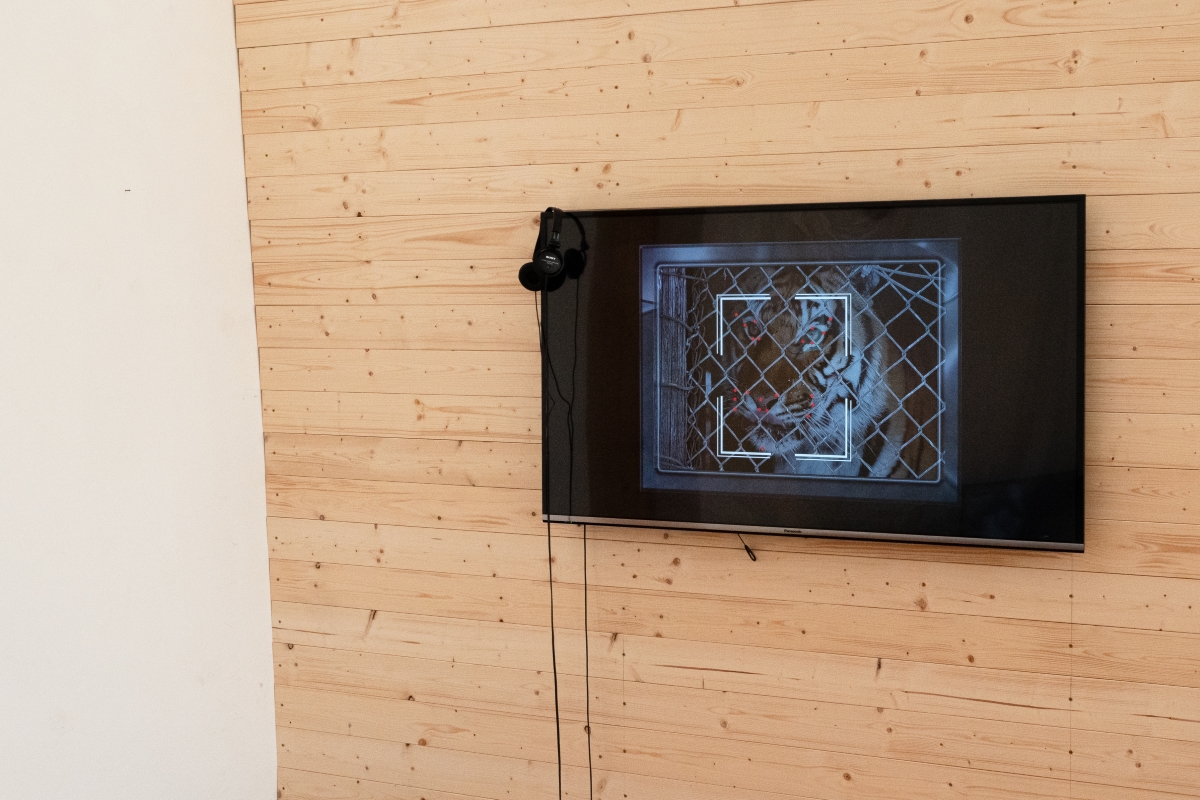 Human and Animal Under One Roof

During the development of our own species, some animals became part of human homes – in stables or barns (now maximized in the form of mega farms) or directly at the “family fireplace”. We consume some of these animals, use their products as food or for clothing, some we use for work, and some keep us company. Their roles in the world of human animals are not strictly determined by the species – on the contrary: we can observe a number of paradoxes, when members of the same species are once our companions, and other times our dinner. The exhibition Human and Animal under One Roof (but more precisely the title should be “Human and non-human animal under one roof”) focuses on domesticated animal species and our interrelationships and dependencies. Through the works of contemporary Czech artists, the exhibition wants to question the utilitarian approach we take to other living beings and to consider more equal ways of living together.

Human and animal under one roof

My dog died two months ago. I lost a close, beloved creature that had accompanied me through life for ten years. Dealing with this loss has not been difficult only for me but also for my other family members. This exhibition is not a response to his death — I had been planning it for over a year — but this particular experience has sharpened my perception of its topic, it being the relationship between humans (human animals) and other animals.

I have always had a deep affection and curiosity for animals. As a child, I used to catch insects drowning in the swimming pool — which I still sometimes do. I smash mosquitoes and moths mercilessly, though. I notice several paradoxes in my approach, but in general, I find it hard to deal with the fact that a living creature might be suffering. When I was a child, my grandparents took me to visit their friends on the farm on several occasions. It was always sometime around Easter when baby goats were born. The situation in which I could play with the goats and the baby goats in the garden when they were let out to pasture made me ecstatic. The goats were so cute and playful. I still have a special soft spot for goats. However, even then I had to suspect or even be fully aware of the fact that most of the little goats will become “meat”. I somehow managed not to admit it to myself. They also had a very aggressive rooster on that same farm, which attacked me multiple times. Eventually, the last attack prompted the farmer to slaughter the rooster in front of my eyes without giving it a second thought. I remember a controversial feeling of relief (perhaps even a certain satisfaction?!) but also regret and guilt. I was explained that aggressive roosters were causing troubles anyway, and that therefore, I was not responsible for the whole situation. The next day the rooster became a soup. I was not able to eat it…

However, other than that, I have been eating meat for the vast majority of my life without much hesitation. Grandma’s delicious pork cuts had – unlike the rooster soup – no clear association with the living pig. Even today, I am not a strict vegetarian, and I eat meat or meat products in situations where there is “no other choice” because otherwise it would be thrown away and I would be left hungry – so pragmatic reasoning wins over moral imperatives. Increasingly less but still, I will occasionally also have a meat product simply because I am truly craving it. A much bigger dilemma than meat, which I can live without most of the time quite easily, are dairy products. Those are hard to give up as I cannot find the plant-based substitutes as nearly as satisfying.

However, this exhibition is not an agitation that aims to limit (or avoid) the consumption of animal products (although it certainly would wish to contribute to this approach)[1] nor is it my personal confession. But I consider it important to outline my premises.

The fact that most people can consume milk products even in adulthood is not an “inevitable nature” of the human species, a “natural setup of the human digestive tract. This ability had been evolving in us over thousands of years[2] of domestication of cattle and other animals that produce milk. However, practical benefits were probably not the only and quite possibly not the main reason for the beginnings of domestication. As Wikipedia states, “Throughout human history, domestication of all animals that could be used for any purpose, and certainly of all those that were hunted, has almost certainly been tried. Mankind has also had a general predilection for the keeping of pets, which has been observed in indigenous peoples as well. It may be presumed that in many animals the capture of young and their keeping as pets was the first step towards domestication.” It is a well-known fact that the first domesticated animal was the wolf, from which the domestic dog evolved. Current science demonstrates that over fifteen thousand years of coexistence, dog and man have interacted even at the genetic level so that the very tendency to have a dog (or cat) as a companion is written into our DNA.[3]

However, our relationship with animals is primarily culturally determined. In many Asian countries, dog meat is still widely traded. Just type “dog meat trade” into Google and you will be confronted not only with the fact that dogs are consumed, but also with how they are treated and slaughtered. In many countries, it is common for dogs or cats to live as strays. The estimated number of stray dogs around the world is around 200 million, but this figure is, of course, merely an estimate. In the Czech Republic, dogs and cats are treated differently if they are classified as pets. However, what would be considered cruelty in the case of pets is accepted when it comes to laboratory animals. And dogs, among other animals, continue to be included in that group even here in Czech Republic. They make up approximately 4% of all animals upon which experiments are conducted[4]. What distinguishes these dogs from those that greet us at home when we come home from work? And what distinguishes the clever piglets that have become popular pets from the pigs that chew their tails off in the cramped pens of large farms?

Despite legislation which mandates the use of non-invasive measures to prevent tail-biting, the practice of preventive tail docking of piglets at a few days of age is common in our country. Painful procedures are also carried out on millions of lambs, which (especially in Australia) have a strip of skin and wool removed from the rump area to prevent parasitic infection. So-called mulesing is often performed without anesthesia[5]. It is a sad fact that farm animals, which share the longest history with humans alongside dogs and cats, can legally be subjected to the greatest suffering. As Kateřina Šimáčková, a judge of the Constitutional Court, points out, “The traditional universalist triad of rights belonging to all human beings – the right to life, the prohibition of torture and the prohibition of forced labor – will not help us in the protection of animals. Since time immemorial, humans have kept farm animals to use them for food and labor. However, compared to the past, there have been developments that have rather worsened the position of animals. The animal that used to live with its family, which used to be a valuable asset, has become a cheap object of agricultural production. In the context of today’s factory farms, slaughterhouses and shipping containers, one of the most important themes in the protection of human rights comes to mind – the unacceptability of deindividuation and objectification of the living being, which in turn leads to inhumane treatment.”[6]

Philosopher Theodor Adorno’s statement that “Auschwitz begins where one stands in a slaughterhouse and says, ‘They are only animals,'”[7] may seem far-fetched to many. Judge Šimáková here adds: “The basis for viewing human rights as natural rights is the natural restraint most of us have against interfering with the rights of others. So if you have a natural restraint not to kill or torment an animal, you should also respect the natural right of that animal not to be killed or tormented. And not only should you not do it of your own volition but you should not participate in a system that allows the killing and tormenting of animals at all.”

[1] Here, the text ‘Mechanisms of Contradictory Relationship to Animals’ by Tereza Vandrovcová published in the anthology Animal Touch (eds. Eva Koťátková and Hana Janečková, Artmap, 2022) may serve as an interesting starting point for further reflection.

[2] In the case of cattle, sheep, goats and pigs (i.e. the most common domestic animals), the length of the domestication process is reported to be 8,000 years.