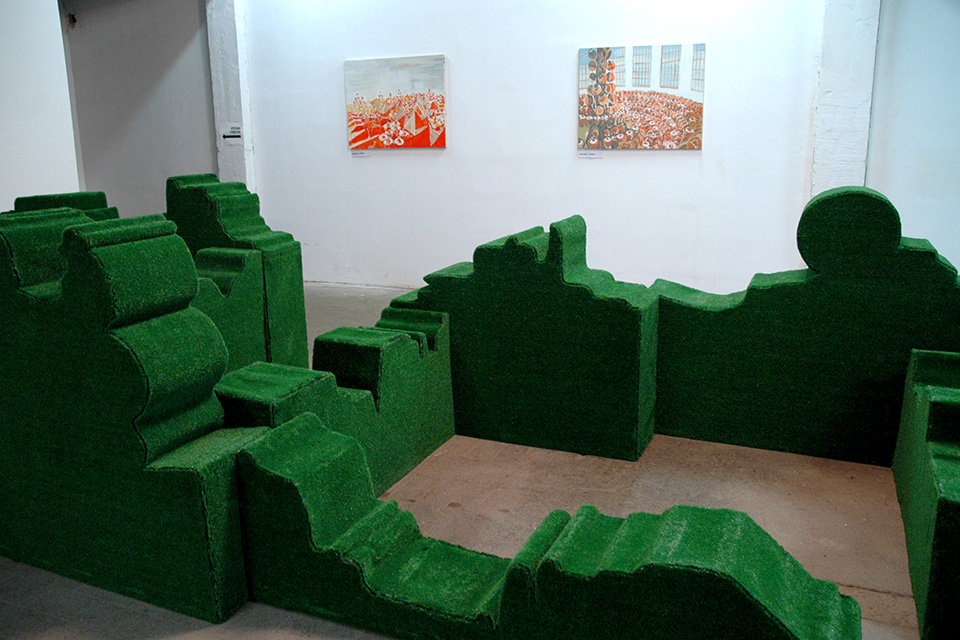 In the main catalogue about the famous Wide White Space gallery, Yves Aupetitallot asks Bernd Lohaus and Anny De Decker what made them decide whether or not they would back a particular artist. The former gallery owners replied that their first condition was that they didn’t understand a work. Now that I have resolved to write something about Nadia Naveau’s work, I cast my mind back to that felicitous reply. At last work we don’t understand! At last work that results in what Luc Tuymans calls physical intelligence, a manipulation of forms, textures, colours, areas, volumes and lines, which involves building up and scraping out, covering over and uncovering, making a hollow and making a round, blurring or sharpening, endlessly summoning up images and having them disappear again as the dogged consequence of an excessive, albeit usually subconscious awareness of the visual, non-discursive structure of our intercourse with the largely invisible and insusceptible world we call reality.

You grope your way uneasily towards Nadia Naveau’s work. On the one hand, you have the amusing, artless, oversized toys, the elegance and the carefree coloration of the drawings, the sculptures and the installations and, on the other, you have those rounded, droll, stocky, amputated Boccioni forms, those anonymous, inert Golems, which would not be out of place in a nursery that has become a thousand times bigger as we were overtaken by the first wave of sleep and which, like bushes or dumb, confined animals, inhabit the night with their shapeless shadows, deep cupboards, dark cavities and unlit corners, where time moves so slowly, morning never seems to arrive… There appears to be a dark, hulking inside, I mean an inside that wants to become an impotent form of the material and, at the same time, there is that festive skin, a tingling, striped, carnivalesque or comic-strip-like surface. How should you look at it; what should you feel and think about it? I see an attempt at rust, gingerbread, squelchy, spongy, dark-green skin that has no outside, but is sucked into a dark vacuum like a sponge, and then I see white shiny leather sewn round an unseen shape, with fragile seams, and then I see the coloured tent that threatens to fall from the body. I know, I am repeating myself, but that is all part of the groping process: without an end, describing a circle, like breathless stumbling, enmeshed in the surface and afraid of the sucking, endlessly gaping depths. (In a manner of speaking, of course.)

Joseph Jessen expresses with an original language – an automatic, autonomously operating language, conjuring up phrases, utterances and meanings on the page for you all by itself, making meanings come into being because you are reading them, and then afterwards veiling them again in the mists of all kinds of modes of thought. In his work everything moves, nothing is static. To stick with the same metaphor, in this text, not a single word would have been spelled correctly, “apologees for the many mistakes in dutch (…) hoopefelly it is understandable.”
Joseph Jessen belongs to a group of artists for whom life and work are so interchangeable that the borderlines between those two seems to have practically disappeared. “Seems”, because instead of an independent artwork, we are confronted with an immense artistic undertaking at different levels of reality, with life itself as the leading and discriminatory principle. No single medium or form of expression will therefore vie for precedence. Absolutely everything is given its due and has its role in an enormous construction: drawings, paintings, concepts, installations, digital photographs, music… The exhibition Po(s)t Pori shows Jessen’s last works – the cycle of paintings inspired by various interiors.