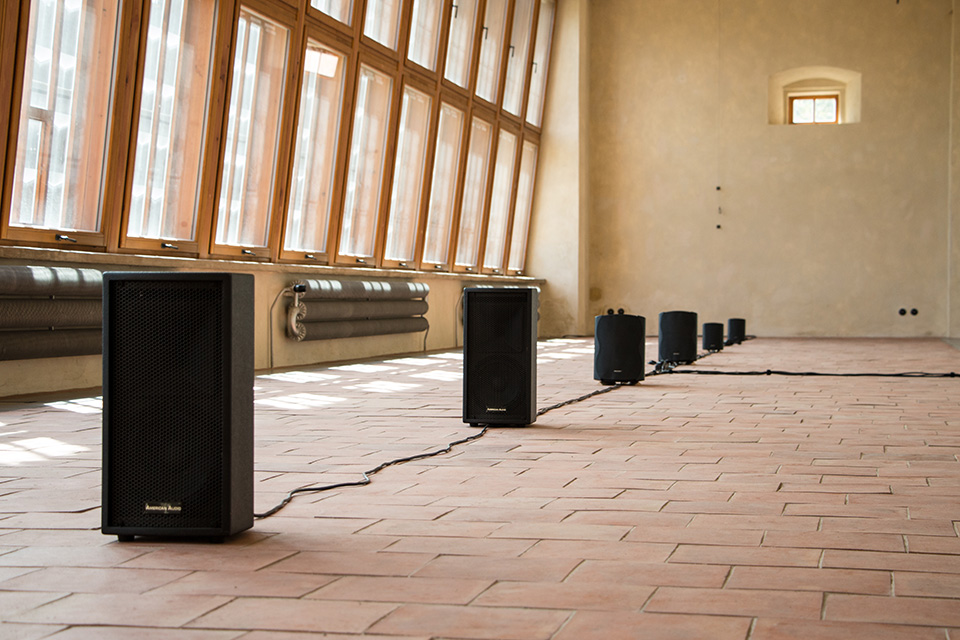 Stone Skipping is a sound installation by Yumiko Ono composed of speakers which each consecutively play the sound of a stone “skipping”, hitting the surface of water. This gives the illusion of the sound moving across the room in a way that invites the audience to reflect on spatiality, distance, and the ceaseless movement of time.

Repetition is a common motif in Ono’s work, but in this piece evokes more specific images of meditation, spiritual training, and the concept of reaching emptiness, infinity, or “absolute nothingness” (無). This idea can be seen reflected in the chanting of Sutras in (Zen) Buddhism, and its metaphysical formula of “self = zero = Infinity”*. The association between the sound of water and silence is seen often in Japanese culture, such as Japanese sand gardens, representing rivers and mountains, as well as the famous Haiku poem by Basho about the sound of water made by a frog jumping into an old pond. Subsequently, one might easily be able to view the water sounds filling the empty space of Stone Skipping as belonging firmly within this tradition.

Using the evocative sounds of skipping stones reminiscent of quiet solitary reflection or the everyday playing of children, Stone Skipping unites the meditative and the playful in its still atmosphere. The combination of all these elements produces a dynamic tension between seriousness and joy at once, complementing and subverting one another in a dialectic relationship.
* Franck, Frederick, ed. The Buddha Eye: An Anthology of the Kyoto School and Its Contemporaries. World Wisdom, Inc, 2004.