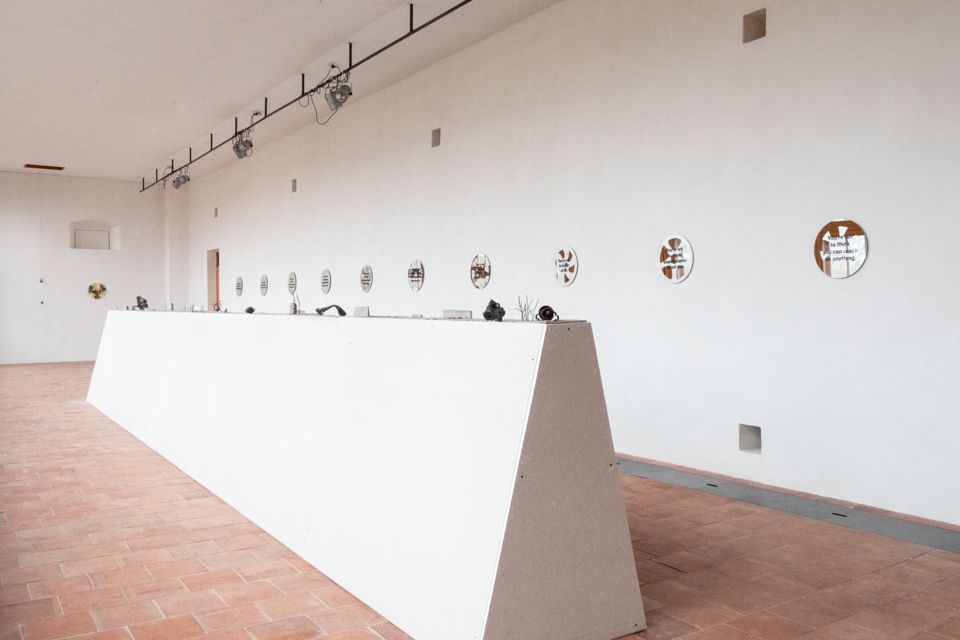 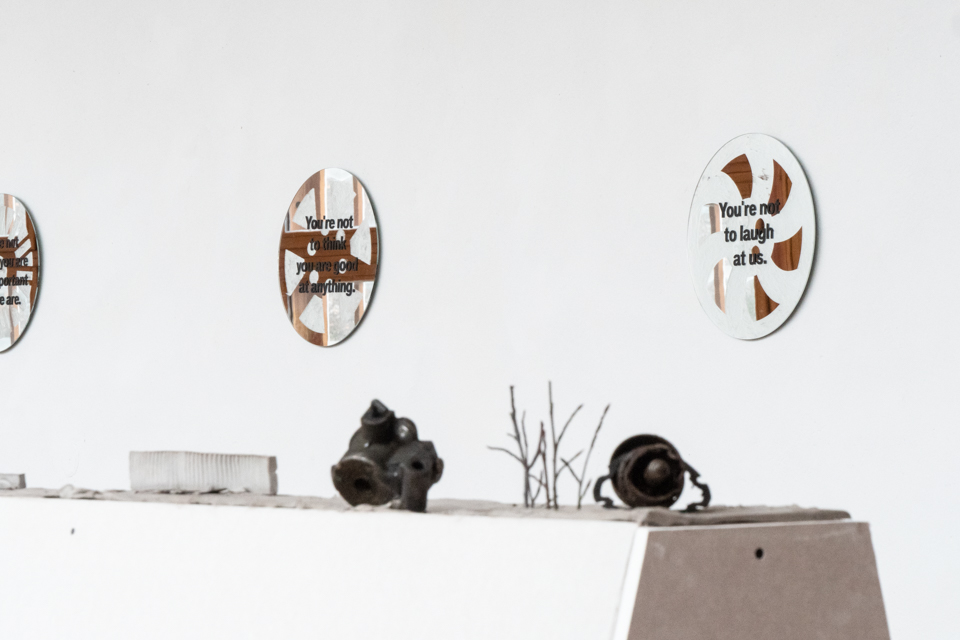 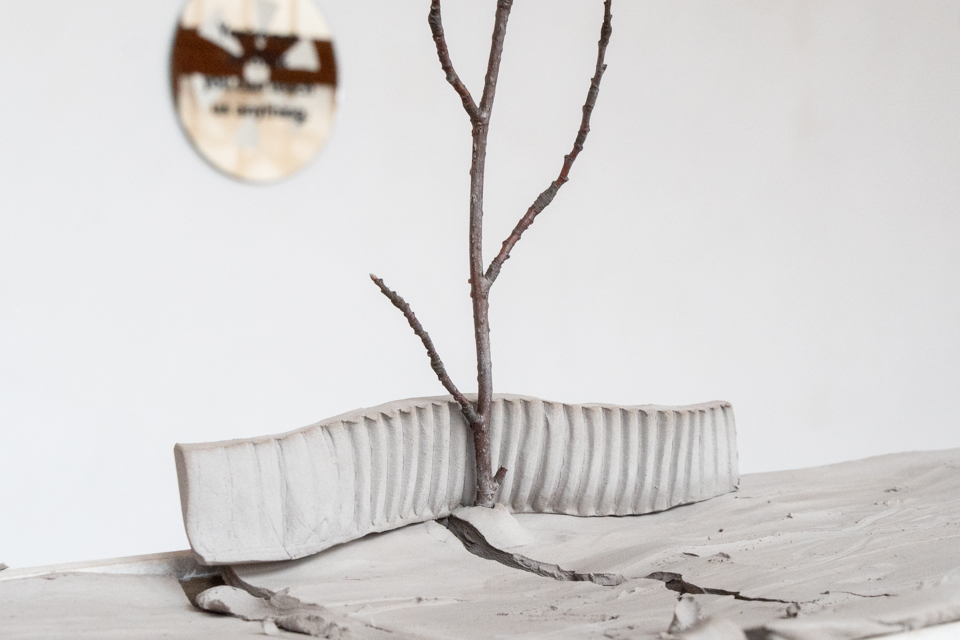 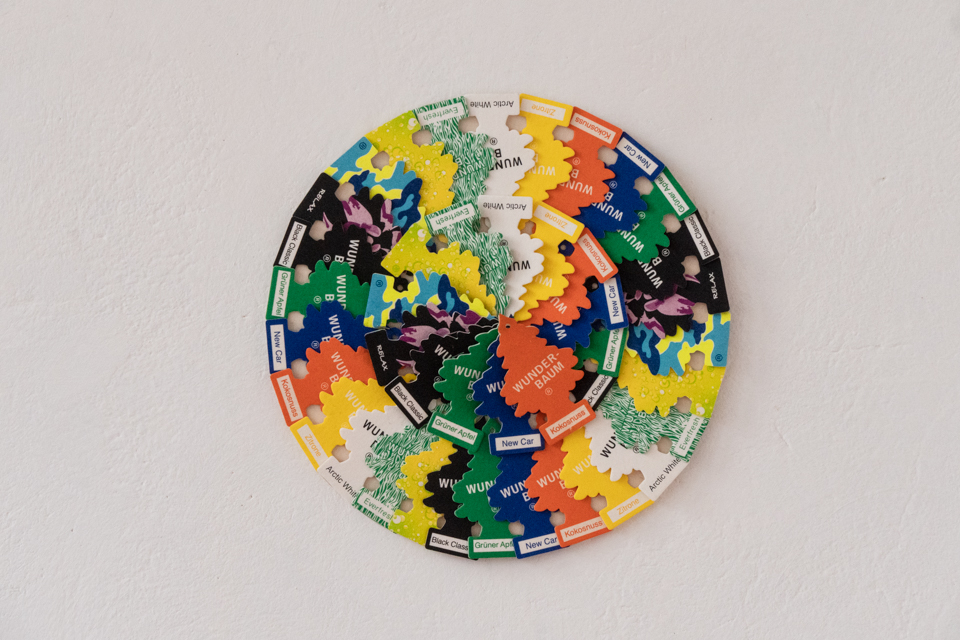 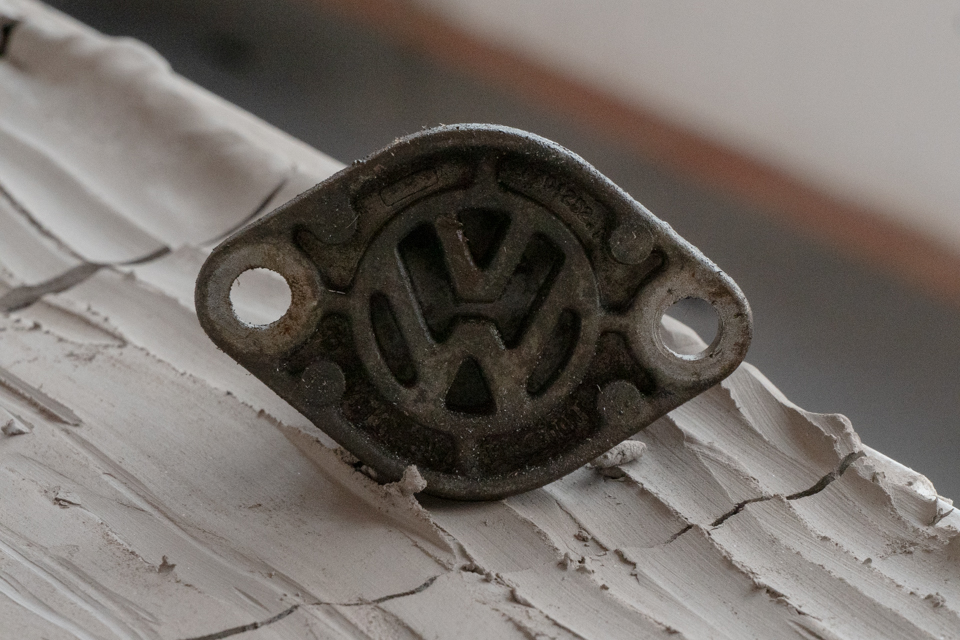 Exhibition as a road movie. The D1 motorway is lined with empty coffee cups, Red Bull cans and cigarette packs. Duo of protagonists drives up in a shiny silver car, it has clocked up some miles, but the potential for adventure is still there. The plot is clear: a used car owner’s dilemma. To repair, to invest, how far should one go? Or get rid of the money black hole. Car as a companion for the vacation in Croatia, a helper for moving material to the studio, as well as an object and a trigger of small family dramas. It has both practical and emotional value. It can be a burden. How will the perilous journey from Brno to Prague go? And will the gearbox make it?…

..The gearbox did make it after all (part of it, anyway), and along with it other symbols of motorist culture have materialized in the Entrance Gallery. The exhibition title is telling: Katarína and Ondřej have (from their salaries as assistant professors at FaVU VUT) bought a second hand car from their relatives, and this started a series of events and ordeals sometimes so absurd that it inspired them to devote the exhibition to their old car. This playful permeation of life and art provides an empathetic experience for a wide spectrum of the Entrance Gallery audiences. Formal core of the exhibition is the use of models and shorthands which is a long term interest of both authors.

Old car and the motorist culture in general come with a plethora of connotations and possible interpretations. However, Katarína Hládeková and Ondřej Homola hadn’t left the viewer without some guides. They give the exhibition a specific interpretive angle by citing the rules of the so called Law of Jante. This Scandinavian concept originates from the novel A Fugitive Crosses His Tracks (1933) by Nordic writer Aksel Sandemose which deals with morality and social attitudes of a fictional town. The code of conduct that the residents of Jante follow could be summed with: „Do not think you are better than us!“

It is said that the Law of Jante describes a quintessential part of the Scandinavian mentality. What is interesting is the ambivalence of this characterization. While Sandemose presented the Law to ridicule conformism and collective pettiness, many Nords and Danes see it rather as an expression of egalitarianism, which they view as the foremost achievement of Scandinavian societies. Do the rules serve to suppress individuality and free thinking, or are they actually promoting social consciousness and empathy? Both options are possible and both can be related to the exhibition and its authors themselves. When we see ourselves in the mirror and read one of the ten Jante commandments, we are provoked to think about the relationship between “you” and “us”, and who is being denoted by which. For instance, is it drivers and bikers, drivers and other drivers, those with new cars and those with old ones, people from Brno and people from Prague, teachers and students, artists and gallery visitors? Who can and who should stand out? When is it better to join the slow lane and keep the orderly tempo of others? Who is permitted to teach others? Who has the right to laugh at who? Lets keep asking questions – after all, social codes (unlike traffic codes, which serve better when followed unquestioningly) are supposed to be questioned and challenged.