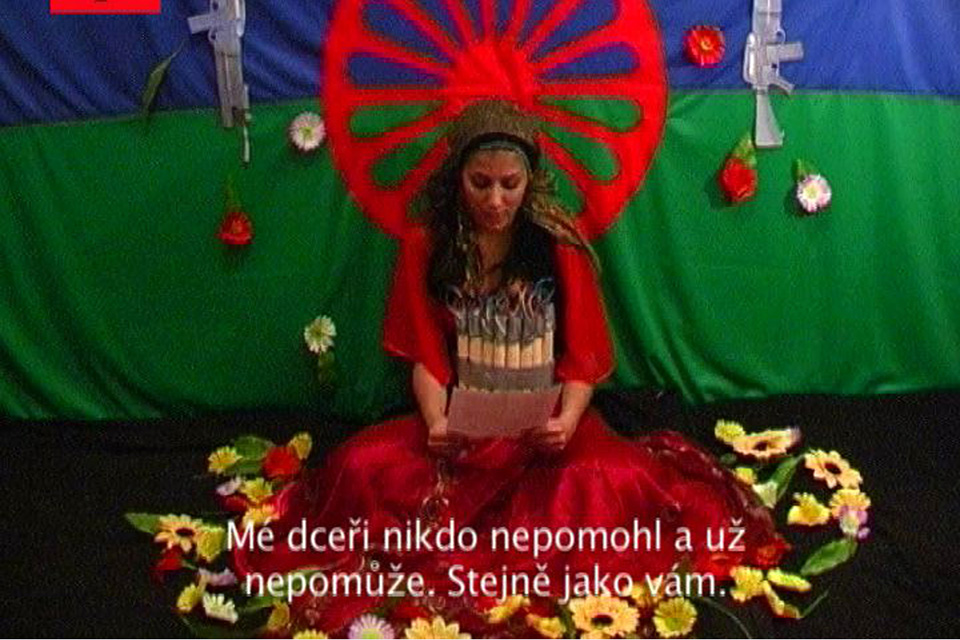 Tamara Moyzes has in her work always focused on political problems and she does so again in her newest project called TV Terror. She deals with one of the most controversial topics of contemporary Czech society – the coexistence with the Gypsy community. Her project can be seen also as an artistic addition to the current political discussion. It illustrate the public opinion which makes the politician a hero because of his speaches full of racism – the public admires him, because he is not afraid to express what many people think.

The videos of the author play with the possibility that the constant discrimination could drive the Gypsies to suicidal bomb attacks. The suicidal bomb attacts have lately become the weapon not only of organized terrorist communities, but also of desperate isolated individuals. The wish to promote their problems in such a brutal way can be and is often detected in every discriminated group of people. The instruction video in Gypsy is a tragical-comical parody of palestinian video showing how to make a bomb, of a video that was supposed to infiltrate every single household. To make a bomb is today just as simple as cooking a dumpling.

Personal testimonies of Gypsies styled as suicidal bombers are tru stories which tells us that the seemingly shocking parallel with the situation of palestinian terrorist is not so far-fetched. The documentary videos show interviews with people in the streets and prove that the “majority” has hardly ever any personal experience with Gypsies, nevertheless the people have a strict and distinctive opinion on them: “We do not mind them”, if they are “decent”, which in newsspeak means “assimilated”.

The main media that forms opinions of the majority, is television. The media brings us the second-hand news on well-selected reality, infiltering the subconscious of the viewers and thus forming their opinions. It also filters away all the information that makes the society uneasy or that the society considers incorrect. Tamara Moyzes does not openly critisize the media, but she uses and uncovers their technique: in the artistic project of her private television she shows a mixture of reality and openly arranged situations. But the border-line between them can be sometimes quite indistinct. Some of her videos on purpose resemble “home-videos” that transgress social and media limits.

Tamara Moyzes tries not to be too academical in her work, her art is straight-forward imagination – she does not comment upon the reality from afar, she enters the very epicentre of all action. The people in her fictitious documentaries are not actors and their artistic “character” only emphasizes and enlarges their real situation. To uncover the current social controversies, the author uses a mixture of documentary, poetic and funny sequences. But the parody is only a strategy, it does not does not ease the situationv – quite on the contrary – it helps her to present the explosive content in a form that is more acceptable to us.

The project TV terror by Tamara Moyzes is based on fiction. Why do we think this is so clear?

We have gotten used to the fact that the Gypsies do not use public violence to react to the overall lack of laws in their favor. Also they are not capable of any significant resistance. The society has not accepted any general anti-Gypsy laws, so we presume that they “just have to” see all suppression as only individual cases of violence.

Some artists use found material, but with TV terror we are certain from the very first moment that she arranged the videos of the Gypsy bombers. The reason for this opinion is not only the dumpling used for anti-Czech terror, but also the universal presumption that there is no significant reason for terror in our contemporary society.