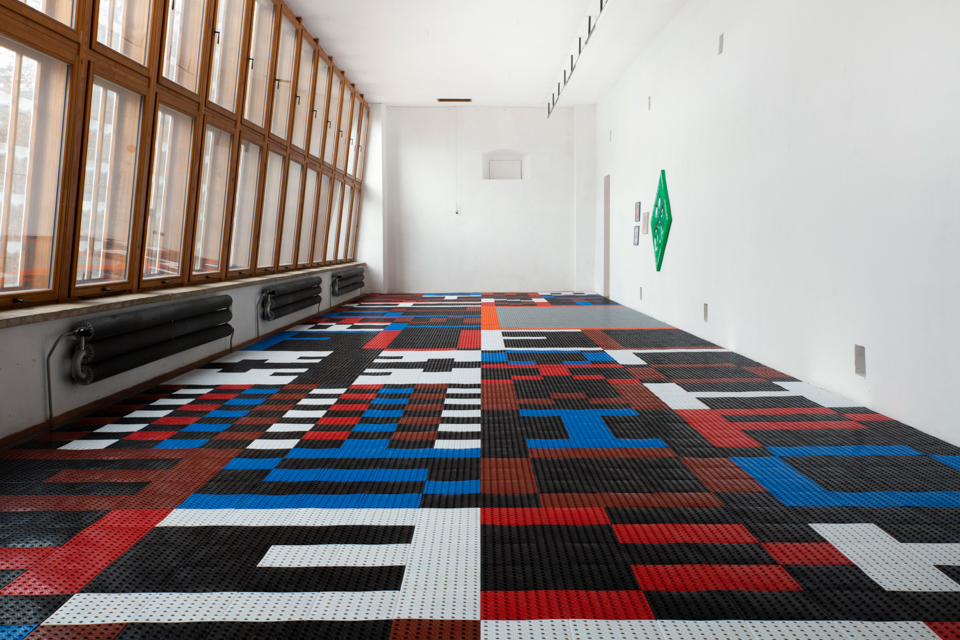 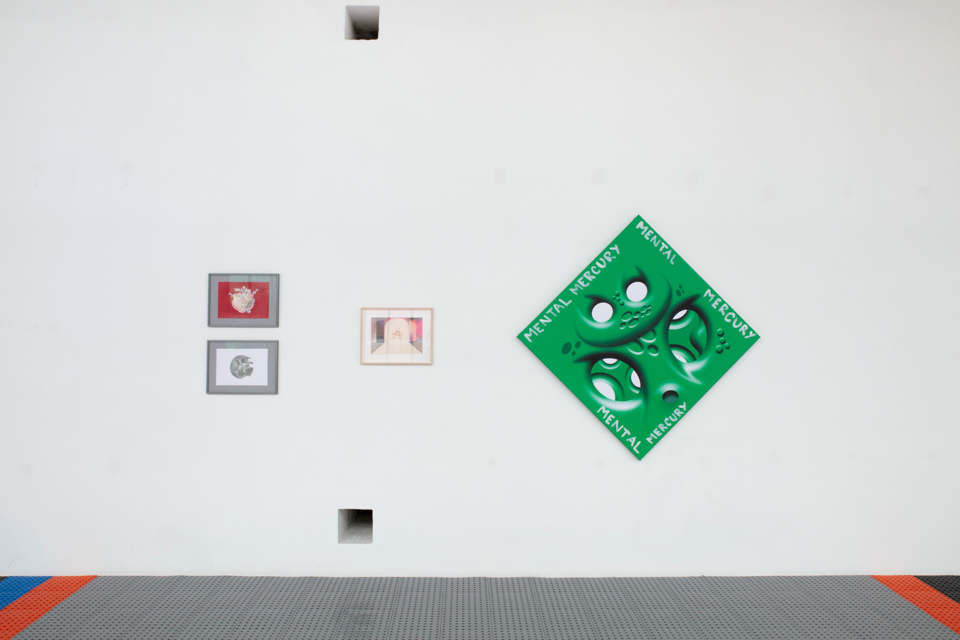 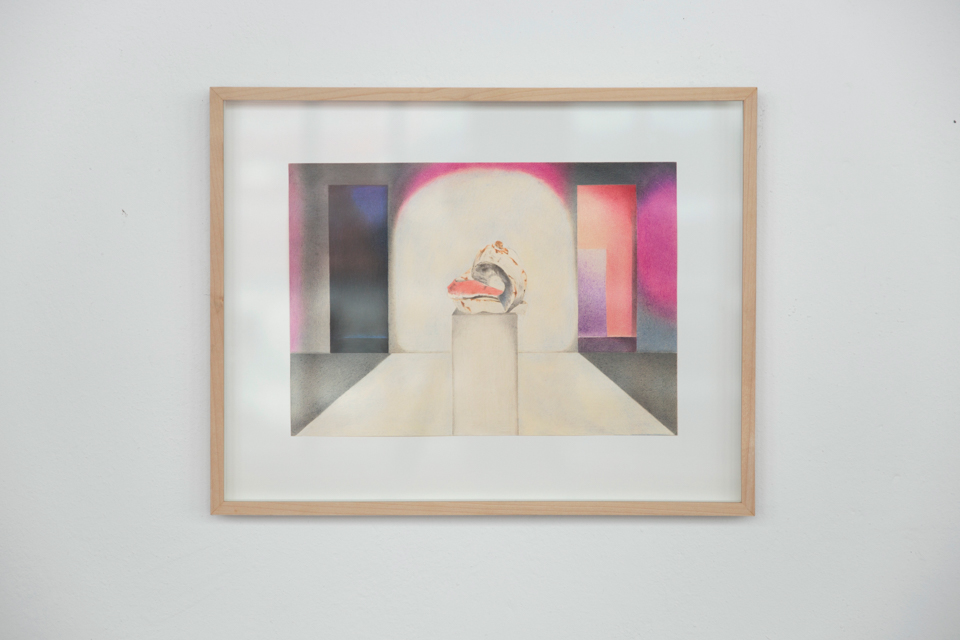 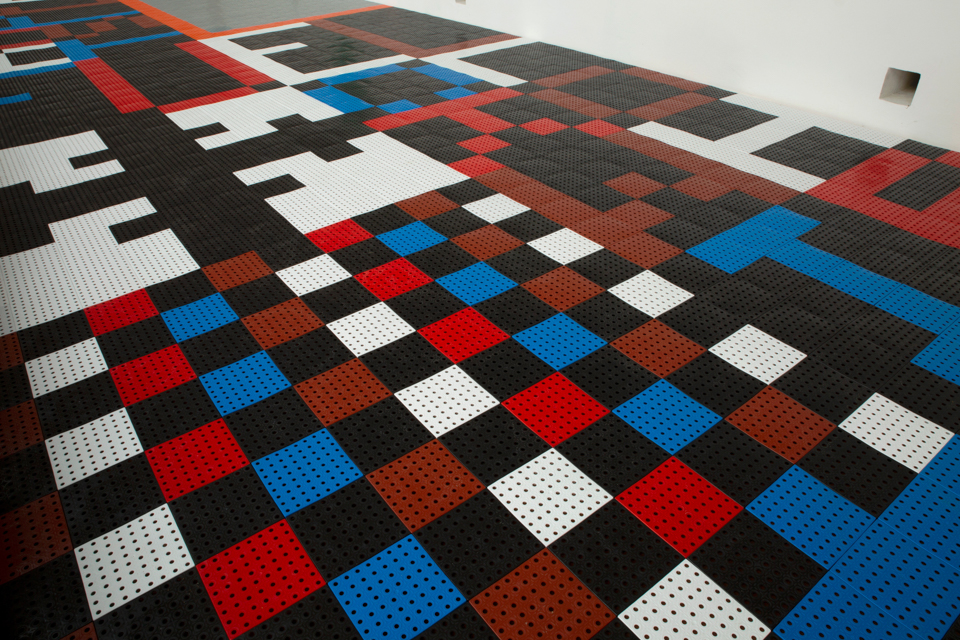 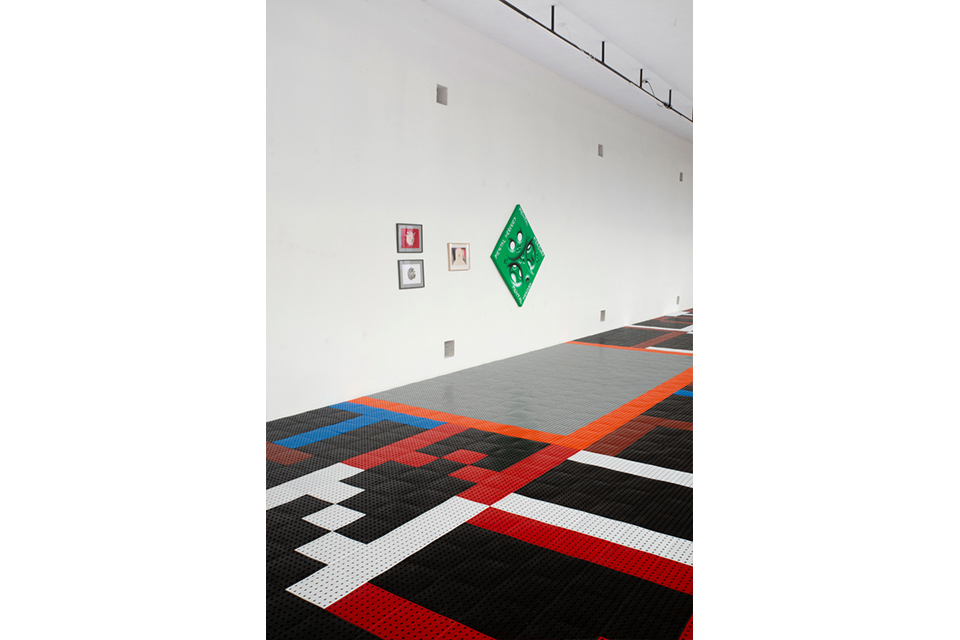 Do you remember from your childhood a game or a language exercise in which you had to write as many words with the same characteristics as possible? Words with no vowels or nouns with only three letters and so on. An advanced level of this exercise would be writing a short story or a poem with only those words. We can go on in this exercise by applying another limit; we can, for example, place the words in a grid and use a reduced number of colours to differentiate individual letters. That’s the approach taken by artists Richard Nikl and Marta Riniker‑Radich who created a spatial ‘poem’ by using almost two thousand plastic tiles and eleven English words which they organised on the gallery floor. All words consist of only four letters and have more meanings. We can speak of a ‘poem’ from a modernist point of view and think of the legacy of Jiří Valoch, a renown Czech artist and theoretician who took part in the boom of Lettrism, an avant-garde movement, in the second half of 20th Century. Similarly, as in Valoch’s installations of black words ingeniously placed in an empty gallery space, we must find meaning while moving in space.

However, Nikl and Riniker‑Radich didn’t aim at referring to historical artistic movements and their representatives but rather created their work for the specific environment of the Entrance Gallery. Their minimalistic horizontal installation made of industrial flooring, used mostly in garages, highlights the running non‑divided architecture of a former orangery and at the same time strategically hides the historical clay flooring which is often a tough proposition for contemporary artists. The work of art covering the gallery floor is a place of assembly and union of two exhibiting artists; it is a work they created together and at the same time it serves as a foundation of the exhibition which can be physically entered by the audience.

The demarcated space with clear boundaries lies at the centre of the gallery and thus creates a kind of a ‘meta‑exhibition’. Moreover, one of the drawings by Marta Riniker‑Radich that depicts a sculpture on pedestal in some vague space can be viewed as another ‘window’ to some other imaginary exhibition. This conceptual multi‑layered quality is mirrored on the formal level or the exhibited pieces of art. It is most apparent in Richard Nikl’s series of paintings called Clover where the artist plays with the illusion of a three-dimensional space. Similarly, Marta Riniker‑Radich draws us in her realistic drawings to see beyond what can be seen and repeats the motif of an aperture or almost a spiral. Both artists thus return to the design of the flooring with holes in which one can sense another layer – the hidden floor itself.

The exhibition space is both full and empty and Nikl together with Riniker‑Radich consciously play with the viewers’ movement and their point of view. As the title of the exhibition – Auf Augenhöhe (literally ‘At Eye‑Level Height’) – suggests, the idea is to play with the angle and position from which we view the world. In the moment we enter the gallery, the space can seem empty or one can assume the content is not clear. The exhibited paintings and drawings are not placed at standard eye‑level height. The term ‘eye‑level height’ is a commonly used one. What does it mean, though? Whose eye‑level height? From what position do we determine it? Our observation is often relative and incomplete, we have to change the perspective or position of observation. In German, the expression ‘auf Augenhöhe‘ describes acting in a way that it is direct and has class, in which all parties are equal and respect each other. In other words, even though the eye‑level height is different for all of us, we should strive for mutual respect. Perhaps that is why the main work of art at this exhibition is the colourful floor – it symbolises the collective work of both artists who propose equality and cooperation.

The exhibition is realized with kind support of Pro Helvetia, the Swiss Arts Council.